Time moves slowly in a global crisis, or at least that is how it feels. It is only 11 days since the Australian Grand Prix was supposed to have happened, and it feels like an age ago.

Unlike many of my colleagues, I did not rush home from Australia. The Bahrain Grand Prix was cancelled on the Saturday, which was the starting gun for the race to go home, but I already had bookings to go to Adelaide on the Monday and decided to stick to the plan and spend some time with old mates in South Australia. That evening I drove south from Adelaide across the Fleurieu Peninsula, an enchanting land between the St Vincent Gulf and the mouth of the Murray River on the Southern Ocean coast. To be quite honest, it is not a place I really want to write about because it would be nice if it remained as it is. But perhaps it will as Adelaide has never been a top tourist destination, with the reputation of being rather a sleepy place compared to the more hooked-up Sydney and Melbourne.

I first visited the area about 30 years ago on my way to the Grand Prix in Adelaide. In those days, the Australian GP was at the end of the year and one would fly down from Japan after the race at Suzuka and there and there would then be 10 days to kill before the action kicked off in Adelaide. These days, the Australian Grand Prix is at the start of the season and usually one is too busy to visit Australia before the race and one has to either rush home or head on to the next race. But this year, with a few days between Melbourne and Bahrain, I decided to spend a couple of days there. I’d forgotten what a pleasant place it is, although it has developed a fair bit since my first visit. It is a region of much variety, with ocean beaches in the south, lakes and river ports, there are gentle rolling hills, charming German towns and numerous wineries. In this part of the world, McLaren is a Vale not a racing team.

Back in the day, my host was the motoring editor of the Adelaide Advertiser and so he became the main man when F1 came to town. In 1994 he even got to drove a Formula 1 car up King William Street in Adelaide, without the traffic being stopped - with a police motorcycle outrider in front and another behind.

No-one would believe it in these days of health and safety, but I was there at the Town Hall and watched him do it. I wish I had a photo. Perhaps someone out there does.

The one thing one learns early on about Australia is that the states are very competitive with one another. Melbourne lays claim to the country’s first motor race in 1904 but in October 1902 theLeague of Wheelmen of South Australia hosted a motorcycle race at the Adelaide Oval. At the same event they held a demonstration run for automobiles. Two years later the first actual motor race in South Australia took place at the Morphettville racecourse. It would be a long time before the first BIG race in South Australia, which was held in 1936 to celebrate the 100thanniversary of the founding of the state. It was called the South Australian Centenary Grand Prix, but was also deemed to be the Australian Grand Prix, and was held at Victor Harbor, 60 miles south of Adelaide on Boxing Day 1936.

The Adelaide Mail reported as follows:“The first of the long stream of cars, charabancs, motor cycles and bicycles which conveyed the invading army of 45,000 to 50,000 spectators to the course left Adelaide at dawn,” while the newspaper’s Victor Harbor correspondent reported that “never in the history of the town has there been such a crowd as there was tonight”.

Victor Harbor today is a pleasant enough spot, a seaside resort. Once it was important because of all the goods that came down the Murray River to Goolwa, which did not have a suitable ocean anchorage and so everything was sent by train to Port Elliot and Victor Harbor to be shipped out to the world. Later as the railways developed, so the river trade declined and the old ports waned as well. The event did not feature machinery of Grand Prix level but the local racers had some fairly potent cars nonetheless and they were pretty hard core when you see the roads they raced on. You can still see a section of the original road, running alongside what is now Adelaide Road, between what they called Hell Bend and Nangawooka Bend. There is also a plaque to be found on the same stretch, commemorating the event. This was one of the things we did during my stay, before South Australia closed down because of the virus. We had an enjoyable time, pottering about, having lunches and exploring.

I’ve been travelling to Australia each year for 35 years and I had never managed to see a kangaroo in the wild – despite taking some pretty out of the way roads - and so we found a proper bit of bush and saw dozens of them, hopping about and paying us no attention. Each day we watched the news to see the latest developments in the global meltdown. It was decidedly bizarre…

You might think that rushing home would have been a good idea, but in fact I was asked to stay away a few extra days because there were family visiting my home and they were worried that I might bring the coronavirus home with me. It seemed pointless to explain that being in France was far more hazardous than being in the wilds of South Australia.

If you ever get out that way, it is worth visiting the town of Strathalbyn where there is a quite incredible monument to the motorcycle racer Kenny Blake, who grew up in the town and was killed on the Isle of Man in 1981. The sculpture was built from mechanical parts of all shapes and sizes welded together to create a life-sized motorcycle racer. It’s well worth a detour.

On Friday it was time to head home and I set off back to Adelaide with plenty of time in hand, intending to have a snoop around the Adelaide Hills, visit Hanhdorf and drop in at the old F1 track in Adelaide. There was still work going on to take apart all the infrastructure that had been used for the Adelaide 500 Supercars event back in February, but I had a walk around and enjoyed some memories of the good times we had there.

So I didn’t get an Australian Grand Prix this year, but I did end up visiting three Australian GP venues… 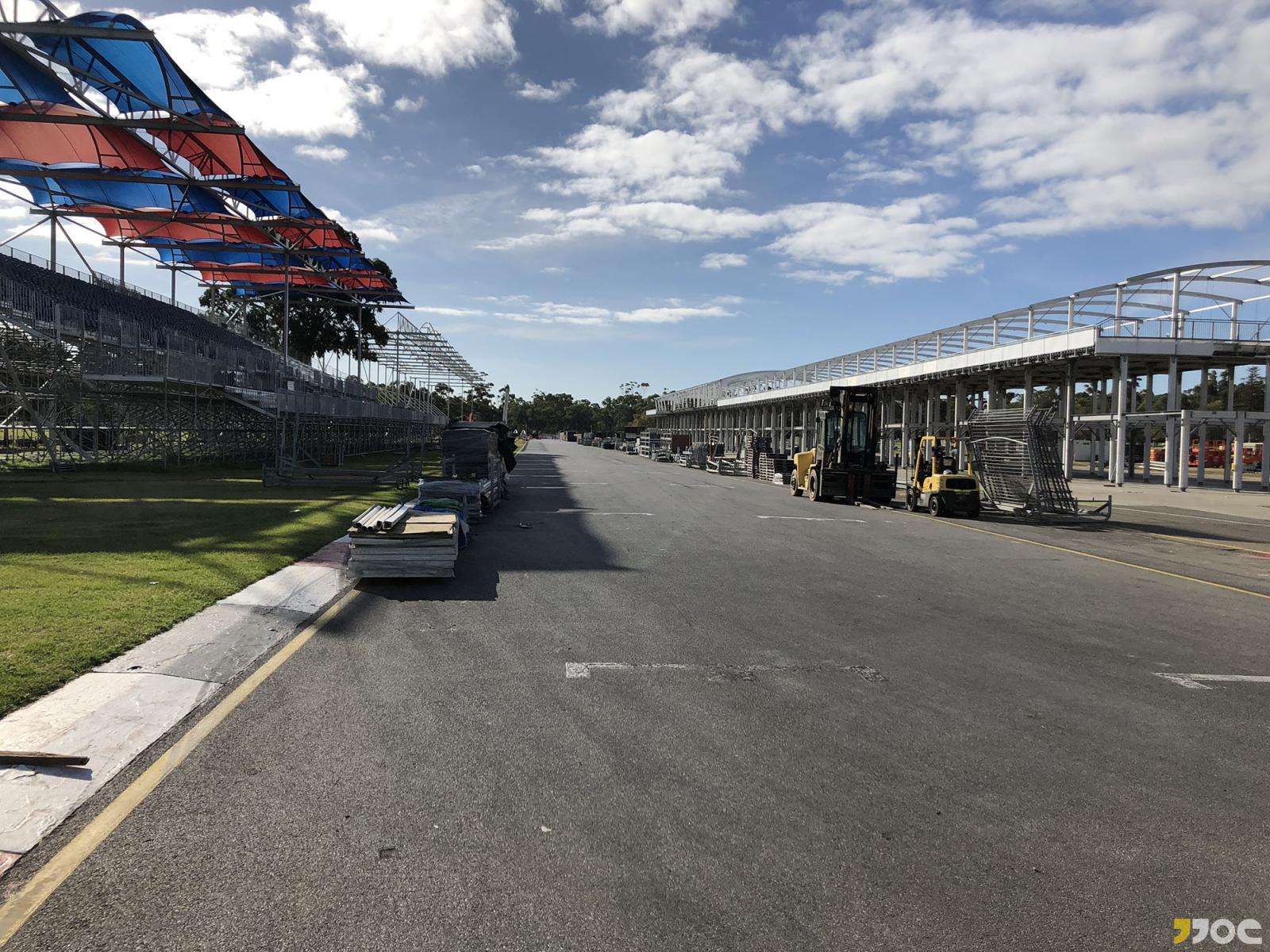